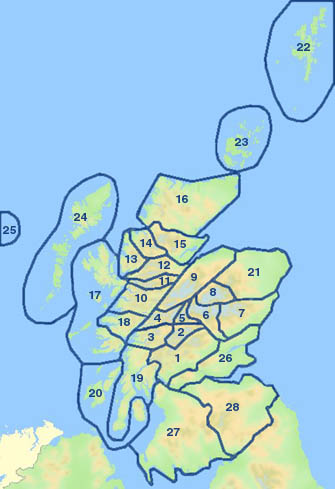 Click on the regions on the map to zoom in and locate the mountains.
The regions, with their names and numbering are taken from The Relative Hills of Britain by Alan Dawson.

The Yeamans are hills published in Dr Eric Yeaman's "Handbook of the Scottish Hills" in 1989. The criterion for inclusion was "an eminence which has an ascent of 100m all round, or, failing that, is at least 5km (walking distance) from any higher point on neighbouring hills".  In 2001 Yeaman included a typed sheet of revisions with some copies of the Handbook.  We give all the hills that have been Yeamans without regard to whether they appear on the original or revised list.  For details please consult the Yeamans Change Register http://www.hills-database.co.uk/yeaman_changes.html..

Yeaman's book was the first published list to include a criterion for drop but none for absolute height.  It was also the forerunner of the Humps.